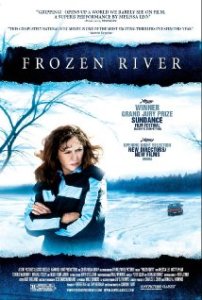 In Joseph Telushkin’s masterful biography of the Lubavitcher Rebbe, he cites an incident in which the Rebbe gives advice to a young woman going through a difficult time in her life when she feels no one understands her emotional pain. He counsels her with an anecdote about motherhood: “When you will grow up and marry and, God willing, have a child, the nature of things are that in the first year…a child begins to teethe and teething is a painful process and the child cries as a result. And the mother feels the pain as if it were her own.” The Rebbe then tells her that this is the way he feels her pain, and that comment enters the girl’s mind and heart.

When we speak about fully identifying with the pain of others, the mother’s love for the child is paradigmatic. This is evident in the case of three mothers who experience crises with their children in the emotionally tense drama Frozen River.

The setting is upstate New York, near the Mohawk Reservation and the Canadian border. Ray Eddy works in a discount store struggling to raise two sons after her husband, a gambling addict, has absconded with all of her savings. In her search for him, she meets Lila Littlewolf, a Mohawk indian who works in a bingo parlor. Although initially mistrustful of each other, they eventually forge an alliance because of their common need for money to provide for their children. Together they transport illegal immigrants over the border from Canada into the United States, crossing the frozen St. Lawrence River, a very dangerous trip that brings them the sizable sum of $1200 per crossing.

On one of their forays to bring illegals into the States, they transport a Pakistani couple who insist on bringing a package with them in the trunk of the car. Unbeknownst to them, Ray leaves the package behind, fearful that it might contain explosives. Once at their destination, they learn that the package contained the baby of the Pakistani woman, who is distraught at losing her child. Ray and Lila do not hesitate trying to recover the baby even though it is pitch black and cold. Ray and Lila are both mothers, and they need no convincing to retrace their route and attempt to locate the baby. Thankfully, the baby is still alive and they happily return it to its mother.

The experience unnerves Ray and Lila, but economic necessity drives them to continue making illegal runs, risking discovery and incarceration by the authorities. Their motivation: to create a better situation for their respective children. A mother’s unconditional love trumps everything.

Rabbi Joseph Soloveitchik, one of the great Torah sages of the twentieth century, poetically describes motherhood: “The nine months of pregnancy, with all its attendant biological and psychological changes, the birth of the child with pain and suffering, the nursing of the baby and, later, the caretaking of and attending to the youngster–all form part of the motherhood experience.” For the mother “the image of the baby, the memory of an infant held in her arms, the picture of herself playing, laughing, embracing, nursing, cleaning, and so forth, never vanishes. She always looks upon her child as upon a baby who needs her help and company, and whom she has to protect and shield.” Rabbi Soloveitchik continues: “The mother can never forget the biological fact that her child was once a part of her, that she gave him her blood and that she brought him into the world with suffering and pain. When she says ‘my baby,’ she means to say: Once we were one body. I gave you life.”

In Jewish tradition, God is sometimes referred to by a feminine descriptive, Shechina, to accentuate the similarity of God’s love to a mother’s love. It is this kind of profound sensibility that animates Ray, Lila, and the Pakistani woman, the mothers in Frozen River. It is a film that reminds us of the overwhelming power of motherly love and how it inevitably asserts itself in the midst of crisis.