Beyond the Sea (2004), directed by Kevin Spacey 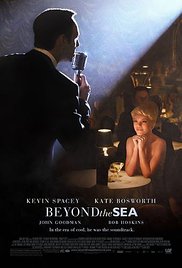 There is a brief scene in Beyond the Sea, a biopic of singer Bobby Darin, which resonates with me personally. Bobby unbuttons his shirt and reveals his scar from open-heart surgery. It looks like a long zipper on his chest. I, too, have had open-heart surgery and remember other patients telling me I am now a member of the “zipper club,” all of whose members brandish an extended scar on their chest.

But there is something more that animates those who have experienced this kind of operation. All of us have an intense appreciation for the everyday miracle of good health, and all of us are sensitive to the reality that life is unpredictable and we have to both treasure and maximize our moments. This is the subtext of Bobby Darin’s meteoric rise to fame.

The film begins with the early history of Bobby Darin as a young boy plagued by many bouts of rheumatic fever which leave him with a weak heart. Doctors tell his mother that her son will be lucky to live past his teen years. Bobby, upon hearing this dire prognosis, is motivated to make the most of every moment of his life. He wants to rival Sinatra’s success; and so he forms a band, playing any venue he can to solidify his fan base and to develop his talents.

He achieves success with a recording of “Splish Splash,” a rock and roll song that makes him a teen idol. But Bobby does not want that kind of fame. He aspires to sing melodies with a big band, and eventually achieves major renown with his iconic version of “Mack the Knife.”

Bobby’s burgeoning success gets the attention of Hollywood where he is cast in a movie with Sandra Dee, an eighteen-year actress whom he marries after a brief courtship. Later he receives an offer to appear in Captain Newman, M.D. as a shell-shocked soldier, a performance that earns him an Academy Award nomination.

As musical tastes change, Bobby finds himself out of sync with contemporary musical trends and his popularity plummets. Bobby, however, does not give in to despair but rather finds a way to redefine himself as a musical artist for a new generation of admirers.

Bobby values the moment, does not take life for granted, and wants to make the most of the time he is given on earth. His childhood realization that he will not live into old age stays with him for his entire career, making him a super achiever. Although he died at age thirty-seven, his music still remains vibrant in the 21st century.

The Ethics of the Fathers cautions us to repent on the day of your death. How do you know when is your last day? You do not; therefore, repent every day since any day might be the end of your life. It is instructive to watch Bobby and Sandra resolve a heated argument. Bobby throws around furniture and smashes windows on his car, driving away in anger. He returns a few minutes later and, embracing his wife, realizes that life is short and he cannot let anger rule him. He must reconcile right away so that he and his wife can get back to the same page of their basically loving relationship.

Moreover, our forefather Jacob always felt he did not deserve God’s many kindnesses and so he constantly felt vulnerable. Feeling vulnerable makes you want to achieve more because you do not know what tomorrow may bring. This kind of sensibility pervades the psyche of Bobby Darin, who understood that any moment might be his last. Beyond the Sea reminds us of the brevity of life and to treasure every minute.