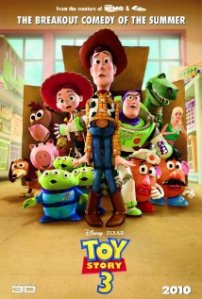 Many years ago, I hired what I thought was a star teacher. He gave an excellent model lesson, had good references, and even played the guitar. Yet I soon discovered a serious flaw. He never wanted to deal with parents. It seems that, once long ago, he was abused verbally and emotionally by an insensitive school parent. The repercussions of that event still lingered and colored his approach to all parents. He was still angry with them, for they were the enemy. Ultimately, I had to let him go because our school welcomed parent engagement and did not see parents as adversaries.

The experience reminded me that sometimes we can let a bad experience define how we behave in the future. In truth, it is a great tragedy if we cannot move beyond a hurtful experience, if we permit anger and ill will towards others to dominate our lives.

Toy Story 3, an animated film that is a parable of human relationships, provides one classic example of this in the character of Lotso, the chief toy in a day care center full of dysfunctional and malevolent toys that lord over the new recruits who come to Sunnyside Day Care. Lotso has allowed a bad experience in his youth to forever taint his relationships with anyone he meets. The back story reveals that Lotso also was once a treasured toy, but his owner abandoned him, or so Lotso thought. In truth, she lost him and did not deliberately abandon him. Lotso, however, lived on the false myth of his abandonment and made that bad experience the seminal one in his life. Anger was what drove him and defined him.

Into Lotso’s monstrous world enter a group of naïve toys, who fear obsolescence when their owner, now grown up, departs for college. They fear abandonment, but take heart in the possibility of finding a warm and friendly environment of a local day care center. From a distance it looks attractive. But a closer look reveals that the ownerless day care toys are not only used but abused. The kids at the day care do not feel any emotional connection to the toys. The children play with the toys and then toss them away. In contrast, the new recruits, accustomed to an owner who had invested in a relationship with them, want in some way to replicate that situation. They want to feel valued, emotionally connected, and respected. The toys are truly us.

Their first impression of Lotso is positive. He is soft spoken and huggable on the outside, but they do not realize he is an angry monster on the inside. His past anger has determined his future.

Jewish tradition tells us that anger is one of the worst traits to possess. In fact, the Talmud compares it to idol worship. When one is angry, it is a manifestation of a lack of belief in God’s providential supervision of the universe. After all, how can one be angry if God is in charge of things? It is a Jewish mode of sensibility to presume that from the aspect of eternity, everything ultimately will make sense because God is orchestrating events in a hidden way which our finite minds cannot comprehend at the moment.

Lotso, whose life is defined by anger, reminds us not to allow negative memory tapes of the past to determine our present or future. It is a bad thing when anger lives rent-free in our brains and influences our present relationships.