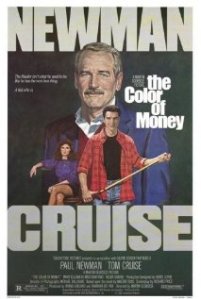 As a youth, I played basketball every Sunday at the local JCC on the Spartans, who were Spartans in name only. We had a mediocre record. Opposing us were much better teams, and one player outshined everyone. Robby regularly scored over 20 points a game, and when he reached high school, he was a superstar. Watching him was poetry in motion.

I expected to read about Robby in the newspapers, but it didn’t happen. Robby dropped out of college, never fulfilled his potential, and played basketball in local recreation leagues as an adult. The snapshot in time that I saw in high school was no predictor of future success. Only in retrospect do we possess clarity. That’s why I chose to review two movies which present the same character, “Fast Eddie” Felson, as a young charismatic pool hustler in The Hustler, and then as a successful liquor salesman 25 years later in The Color of Money. Watching both films gives us a rare opportunity to see the evolution of a character over a span of years. Has he changed and in what way?

There is a scene in The Hustler when Eddie, a pool playing virtuoso, is told that he has talent, but lacks character. Eddie, self-absorbed and arrogant, pursues money. To him, it indicates success; and he admires Bert, a wealthy gambler. When Sarah, Eddie’s girlfriend, asks Eddie how he knows that Bert is a winner, Eddie responds, “He has things.” It is a shallow perspective on life, and it takes a tragedy to remind Eddie that there are more important things than money and fame.

The Color of Money depicts “Fast Eddie” 25 years later, still a flawed character. He renews his passion for pool through a young protégé, Vincent; and offers to take Vincent on the road and teach him how to make money by playing pool in venues where he is unknown. Eddie still wants fame vicariously, and the temptation to hustle still motivates him.

Eddie, however, eventually begins to see in Vincent aspects of his younger self which repel him. Money is now irrelevant to Eddie; what is important to him is simply being the best and winning fairly. There is a moment where he sees his reflection in a pool ball and what he sees he does not like. Eddie’s newfound integrity reinvigorates his pool game, and his ultimate challenge is not winning a game of pool under dubious circumstances, but rather beating Vincent in a private game.

Ethics of the Fathers says that “every man has his hour” of prominence and success in life.  Eddie had his in The Hustler and now Vincent has his in The Color of Money. The question we all face is what happens after our hour in the sun. Do we allow old age and self-doubt to emotionally cripple us or do we redefine ourselves in light of our new reality? Abraham, our forefather, is a role model. The Bible tells us that “Abraham was coming in days,” an unusual way to inform us that he is old. The commentators tell us that this indicates that, in spite of his age, he was vigorous and productive on each day of his life into his senior years. He never retired until God retired him. Change for him was a constant.

Making changes is never easy, but in a moment of reflection, Eddie changes his perspective and desires integrity to crown his life. King Solomon instructs us: “a good name is better than precious oil.” Eddie Felson finally understands this time-honored maxim that integrity is better than wealth.

Purchase The Hustler and The Color of Money from Amazon.com.