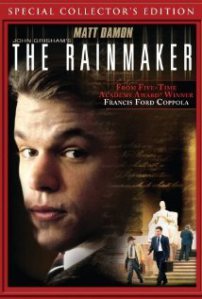 A friend of mine has been studying for the actuarial examinations for the past several years, but without success in passing them. He has hired private tutors to help him, taken online courses, and devotes an hour daily to working on practice tests; but the examination still eludes him. He is a very intelligent young man, a National Merit Scholar in Math, but his paycheck is small without the credential of Enrolled Actuary. Presently, he works for a pension fund company which hired him with the hope that he will soon pass the test that will qualify him for more responsibility in the office and a bigger salary. In the interim, his keen analysis of data and company files has enabled his company to save millions of dollars because of discoveries he has made in the accounting processes of his firm, even though he lacks an official actuarial credential.

There is a character in Francis Ford Coppola’s exceptional legal drama, The Rainmaker, who mimics what happened to my friend. Deck Shifflet is a paralegal who has failed the bar exam six times, but he is a master at locating critical information about insurance companies and their economically driven claims policies. His resourcefulness enables him to get hired by law firms who take advantage of his knowledge at a fraction of the cost of a full-fledged attorney.

The Rainmaker revolves around the case of a middle-aged couple, Dot and Buddy Black, who file suit against an insurance company, Great Benefit, which denied insurance coverage for a bone marrow transplant for their 22-year old son Donny Ray, dying of leukemia. In spite of religiously paying their premiums for many years, they are victimized by small print in the insurance contract which precludes the company paying for aggressive procedures to cure their son. Moreover, Great Benefit has a corporate policy of denying all claims when they are first presented. It is only the customers who press on despite initial rejection of their claim who receive any compensation at all.

Rudy Baylor, a young attorney representing the Blacks against the high-powered lawyers for Great Benefit, has just passed the Tennessee bar exam; but he has never before argued a case in front of a judge and jury. It is a daunting task for a rookie attorney, but he has a secret weapon in Deck Shifflet. When all seems lost, it is Deck who repeatedly comes up with an innovative strategy that potentially can win the case, or locate a crucial witness who has long since dropped out of sight.

The Ethics of the Fathers tells us that the wise person learns from every man. Deck in professional terms is a loser, but he possesses the street smarts needed to be successful in the sinister world of insurance fraud. Deck reminds us that the possession of a credential, a degree or a license, does not guarantee wisdom, insight, or financial success.

Rudy recognizes Deck’s value and partners with him in his law practice. It is a partnership founded on genuine friendship, mutual trust, and respect. Each one relies on the other for expertise in the area where they are weak. Rudy’s sincerity and humility impress the jury, but it is Deck’s resourceful research and knowledge of human nature that buttress Rudy’s legal arguments before the jury.

Our Sages teach us that we should never belittle any man for every man has his hour of glory, his moment in the sun. The synergy of Rudy and Deck remind us that every person has something to contribute to the greater good regardless of pedigree, regardless of intellectual or social background. No one should be considered insignificant.