On the Waterfront (1954), directed by Elia Kazan 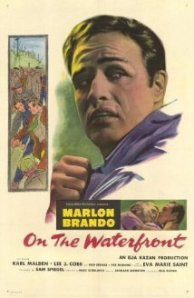 In Orthodox religious circles, consulting with a wise man about personal challenges or problems is standard operating procedure. The wise man usually is a rabbi who possesses a lot of wisdom and life experience, and one who ideally knows the questioner personally. Therefore, when he considers the question, he combines his encyclopedic knowledge with a human touch to give the best advice that he can. The questioner implicitly trusts the wise man, whom he knows has no personal interest that will prevent him from making a good decision purely in the questioner’s best interest. In my own life, I have often consulted with such a sage when faced with personal challenges, knowing that I am getting the best possible guidance.

Terry Malloy in On the Waterfront has no such mentors, no one to help him navigate the rough moral terrain that he faces on the New York docks where he works for Johnny Friendly, the corrupt boss of the longshoremen’s union. Terry innocently sends his good friend Joey to meet with his boss’s cohorts on an isolated rooftop thinking that they only want to talk to his friend. Instead, he witnesses his friend’s brutal murder.

Soon after, two officials from the Waterfront Crime Commission approach Terry asking him to consider testifying in court regarding the death of his friend. When Terry refuses, they tell him they will subpoena him to compel him to appear in court. Now he is faced with a dilemma. Shall I be loyal to my boss on the docks who has given me employment and is a long time family friend, or should I testify against him for the murder of a close friend?

A local priest and the sister of the murdered man become the voices of conscience to Terry, slowly motivating him to rethink his passive approach to the corruption he sees around him. His disappointment in himself and those closest to him reach a crescendo when he has a heart to heart conversation with his brother Charlie, who encourages him not to testify in court against Johnny Friendly. In the course of that dialogue, Terry has an epiphany. He realizes that it was his brother who, many years before, pressured him as a professional boxer to take a dive to pay his brother’s gambling debt. Instead of encouraging him to fight to win a bout that could have given him a chance at the title, Charlie counseled him to surrender;  and Terry naively passed on his one opportunity to gain recognition as a champion and to gain exceptional financial rewards. Terry poignantly acknowledges to his brother, “I could have been a contender,” and we hear the overwhelming disappointment in his voice.

What could have been, what should have been, what might have been are all questions that haunt the narrative. After a series of personal trials, Terry emerges from self-doubt to a person who possesses a clear moral center, unafraid of physical pain or financial consequences. This inspires the dock workers who finally challenge the rule of the corrupt union boss, viewing Terry as the agent of their redemption.

The Ethics of the Fathers, a major piece of Jewish wisdom literature, encourages every man to “make for yourself a teacher.” The Sages explain that this means every man should acquire a mentor, someone to help him navigate life’s challenges. Seeking advice from someone older and wiser than you is a good thing. It is not an admission of weakness or stupidity. Rather it is a recognition that you do not know everything, that you welcome criticism, that you are open to improvement, and that you value the opinion of the wise. On the Waterfront reminds us how important and valuable is a good mentor who has our best interest at heart and who can enable us to fulfill our latent potential.