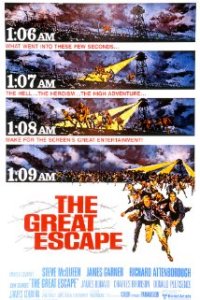 Many years ago, a friend of mine enrolled in a master’s degree program in Social Work. He had great people skills which he felt would insure his success as a social worker and thought the program would be a breeze to navigate. He never envisioned that the program would be academically rigorous, requiring lots of research and lots of homework. But, in truth, it was; and after two semesters, he gave up and dropped out. He was not prepared for adversity, and so the slightest problem became a mountain which he did not want to climb.

The Great Escape tells the dramatic story of a cohort of men who did not give up in the face of adversity, who were focused and committed to their mission even when the road they travelled was bumpy and full of detours. It is based on a true story of a group of prisoners of war for whom the Germans had constructed a special prison camp. Their motivation? All the inmates were prisoners who made repeated escape attempts. The goal of the Germans was to place all these rotten eggs in one basket so they more effectively could control their activities, which distracted and undermined Germany’s focus on the war effort.

The prisoners, however, had different plans, which the ranking officer Ramsey clearly articulates to the German Commandant, reminding him that it was the sworn duty of the prisoners to confound the German military as much as possible in order to tie up German war resources.

The prisoners do this by building a tunnel underneath the camp barracks that extends to a no man’s land outside the barbed wire gates of the camp, thus enabling a cohort of 250 prisoners to attempt an escape to freedom. It is a task fraught with danger and plagued with many setbacks along the way. Squadron Leader Bartlet coordinates the effort, assigns team leaders, and begins to gather the necessary materials to implement the plan.

Many problems have to be addressed. How to get rid of the dirt that they dig out of the tunnels? How to maintain the structural integrity of the tunnel so that dirt does not fall and bury the ones who are building it? How to create forged passports and identity papers? How to determine what dangers lay outside the woods beyond the camp? How to dress like ordinary people so that they are not immediately picked up by the authorities after their escape? It is a gargantuan task and not everything goes smoothly.

What is notable is the response of the men when things go awry. When one of the three tunnels that the men are constructing is discovered, they do not give up. Instead, they devote all their efforts to completing another tunnel. When they find out that the end of tunnel leaves them outside the camp but twenty feet shy of the protective woods, they do not give up. They just accept the new reality and devise a way to signal the men to make a dash for the woods when the guards are not looking in that direction. It is this positive attitude than enables them to succeed. It is a commitment to the mission in spite of obstacles.

This approach to life is a Jewish sensibility. King Solomon in his magnificent book of Proverbs, states that “seven times the righteous fall and yet they rise again.” Life is full of challenges and disappointments. We cannot avoid them. But we do not have to succumb to them. The Great Escape informs us that where there is a will, where there is a focused desire to get something done, there usually will be a way. Things ultimately may not turn out exactly the way we want, but our primary goals can still be accomplished.