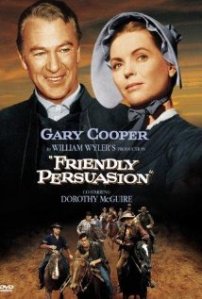 In my career as a synagogue rabbi and day school principal, I have encountered people who hold extremist views. In my first years in the rabbinate, I myself tended to view community conflicts as issues that could be addressed either as right or wrong. There was no middle ground. As I got older and wiser, I saw that there was lots of grey and it was silly of me to see things only in stark black and white terms. I remember hearing Rabbi Norman Lamm, President of Yeshiva University, give a talk on what he called “radical moderation.” In an age of increased religious polarization, it was refreshing to hear a more balanced and nuanced approach to a problem. Now that I am living in Israel, a beautiful land filled with extreme ideologies of all sorts, Rabbi Lamm’s words resonate even more.

I was reminded of this as I watched Friendly Persuasion, a story of a Quaker family whose belief in non-violence is tested during the American Civil War. Jess Birdwell, the patriarch of the family, is interested in worldly things even though he basically subscribes to Quaker simplicity and pacifism. His wife, Eliza, frowns upon any expression of materialism, but becomes more understanding of her husband’s perspective on life. For example, she at first is totally opposed to her husband purchasing an organ for the home; but after a conversation with him, agrees to have it in the attic as long as it is not played when company is around. It is this kind of practical family accommodation that typifies the Birdwell family, a family that has strong core beliefs but one which makes compromises in the woof and warp of daily life.

Against this background of a contemplative and at times humorous Quaker life, there is a war raging, and it affects the Birdwell household. Jess and his oldest son Josh are recruited to fight against the Confederates, but they both decline because of principle. They are categorically against killing. However, when a band of marauders is about to lay waste to their home and possibly kill their family, they are compelled to rethink the verities upon which their life is based.

The movie depicts various responses to their moral crisis. One family member sticks to his belief in non-violence no matter what. Another chooses the path of violence with limitations. Another decides that killing is sometimes justified when home and hearth are threatened. It is a painful decision for him; and while pulling the trigger, he weeps for the loss of life he is causing. The characters all maintain their core beliefs but their actions indicate a personal vision of what is required in the face of real life challenges. There are no simple answers.

Judaism believes that once there is agreement and commitment to basic principles, then we are free to shape our own individual spiritual destinies. Not everyone has to observe the law in exactly the same way as long as we accept the divinity and integrity of that revelation at Sinai. In a sense, this is what we see in Friendly Persuasion. The Quakers agree on fundamental principles, but as individuals make nuanced decisions as they encounter varied life experiences.

A similar approach is found recorded by King Solomon in the Book of Ecclesiastes. Here he writes that “wisdom is better than weapons.” War in Jewish tradition is always viewed as a last resort after other solutions to a threat are exhausted. However, when the threat persists, Judaism permits battle. It is this complex approach that reflects real-life decision-making, which is at the heart of Friendly Persuasion.

Purchase this movie on Amazon.com.