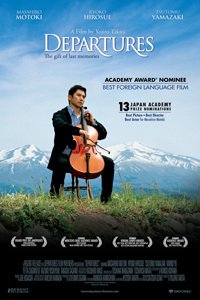 My first encounter with death occurred when I was a rabbi in Atlanta, Georgia. It was my first year in the field and I received a frantic phone call from Wesley Woods, a long-term care facility for the terminally ill. I rushed over and found Al in the midst of his death throes. I heard the term “death rattle” before, but now I actually witnessed it. It was a confusing moment for me. I had no experience with funerals or dying and did not know what to say to the family. When Al finally died a short time after I came, I was speechless. Happily for the family, a priest came by and offered meaningful words of comfort.

I thought of this as I watched Departures, a deeply touching film with an unusual subtext: the rituals that people experience when a loved one passes, which place death in a cosmic context that comforts the mourners.

Daigo Kobayashi, a cellist in a Tokyo orchestra, loses his job when, because of financial considerations, the orchestra has to disband. He moves back to his rural hometown to live in the house of his deceased mother, and hopes to find a job. He answers an advertisement for a person to “assist with departures” and goes to the interview thinking the work is related to a travel agency. After a cursory interview with the boss, Mr. Sasaki, he is hired and quickly discovers that “departures” refers to preparing the dead for departure into the next world.

It is neither an easy nor glamorous job, and Daigo is reluctant to reveal his occupation to his wife. However, after a number of assignments, he begins to understand the supreme value of his work. Many of his clients express the utmost of gratitude for his service, and Daigo begins to feel a great sense of personal fulfillment. His wife, Mika, however, does not share his view and wants him to give up his “disgusting profession” and obtain another job. This disagreement between husband and wife generates tension, until one fateful day when a friend’s funeral requires his services.

As we watch Daigo perform the casketing ceremony in front of relatives and friends, we understand the powerful emotional comfort he is giving to those who are left behind. It is very much akin to the purification ritual, the taharah, that is performed in Jewish tradition in which the body is washed, prayers are said, and farewells to the deceased are articulated. In both Asian and Jewish traditions, there is the given that this world is only a gateway to another, where the spirit reigns supreme. That understanding gives comfort to the mourners, who implicitly know that all men, including them, will undertake the same journey from this world to the next.

Interestingly, some of the special rituals of the casketing process are similar to the ancient taharah. The body is washed, albeit in different ways, and there is great care to insure that body parts are visible only in a minimal way out of respect for the dignity of the departed. Moreover, because the ceremony is viewed as a holy preparation for entry into the afterlife, the one who performs it is valued and appreciated by the family of the deceased. Only the boorish or untutored view ministering the dead as not a “proper job,” as one character says in the film. However, those with maturity and wide life experience cherish the sensitivity of those who labor in this sacred task.

Departures is a one-of-a-kind movie that introduces us to a topic that is removed from daily life, but which helps us understand the long-standing traditions of our faith towards the subject of death. Its sensitive portrait of casketing resonates in Jewish tradition, where preparing the dead for burial is viewed as the highest form of kindness, referred to as a “kindness of truth.” There is no payback when you do a good deed for the dead.