The Artist (2011), directed by Michel Hazanavicius 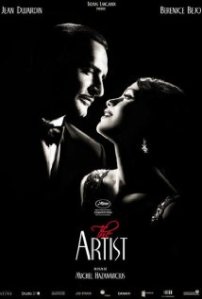 When I was a principal of a day school in Denver, I decided to stage a Shakespeare Festival in which students in the 7th and 8th grades would read and enact excerpts from the bard’s great oeuvre. I gave speaking parts to the students, and I had a particular interest in giving Dimitry, a student who had emigrated from Russia, a chance to perform. When the performance day arrived and Dimitry spoke his lines, I was astonished. Not only did he pronounce the words properly, but he read them like a professional thespian, with understanding and feeling. It was a wonderful performance that forever changed our perception of Dimitry, who until then had not participated in oral presentations in any class. He finally found his groove, and his teachers were overjoyed. His sound made us forget about his silence.

The Artist is an anachronism. It is a silent movie made in 2011, which makes us reflect on the power of words and the power of sight to create art as a representation of life. George Valentin, a silent movie star, is at the top of his game in 1927 as his movies enthrall the audience. Serendipitously, he meets Peppy Miller, a young actress, outside the premiere of his latest movie, and he promotes her for a part in his next film. With guidance from Valentin, her show business savvy and talent grows until she becomes a major star in her own right.

Crisis comes two years later when talking films take over. Valentin dismisses them as a passing fad, but he is dead wrong. His efforts to produce a financially successful silent film when people want sound prove to be disastrous. Moreover, the Stock Market Crash of 1929 further destroys his wealth. George’s inability to respond to changing times leads to depression, which Peppy tries to dispel. Their relationship flourishes and flounders as George tries to navigate the new world in front of him, where everything hinges on the spoken and audible word.

Generally, Jewish tradition encourages silence as a fence to wisdom. More words often bring more gossip, more slander, and more criticism of others. However, sometimes it is important to talk, to protest, to engage, to share feelings with others.

A classic case of where it was important to speak and the absence of speech led to tragedy is the story of Bar Kamtza and Kamtza in the Talmud tractate of Gittin (55b-56a). Here the lack of speech led to the destruction of Jerusalem by the Romans. The Talmud records that a man invited his friend Kamtza to a party and, inadvertently, his enemy Bar Kamtza was invited instead. When Bar Kamtza arrived at the feast, the host was angry and insisted that Bar Kamtza leave in spite of the fact that Bar Kamtza would be greatly embarrassed and in spite of the fact the Bar Kamtza even offered to pay for the entire party. After being unceremoniously thrown out, Bar Kamtza vowed revenge because the rabbis at the party who witnessed this behavior said nothing; and saying nothing implied approval of what transpired. Bar Kamtza then decided to inform against the Jews to the Romans, which eventually led to the destruction of the Temple by the Romans. Speech was required and the rabbis were silent.

The Artist, an innovative retrospective look at another time in the history of cinema, is many things. It is a story of a September-May romance. It is also a meditation on how people deal with change in their lives. Do they adjust to new realities or do they remain paralyzed in the present? It is, moreover, a thoughtful reflection on the power of silence and the power of words to change our lives.