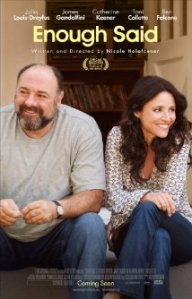 After my wife died suddenly of a brain aneurysm almost 25 years ago, my world fell apart. Emotionally adrift for a year, I then decided to remarry not to replace what could never be replaced but to begin a new chapter in my life. After a year of traveling from Atlanta to New York to date women, I married a divorcee. I had six kids and was busy working as a high school principal.

Marriage at that time in my life was entirely different from what I experienced in 1965 when I got married for the first time. Now I needed not only companionship, a friend and confidant, I also needed someone to help me manage my stressful professional life, and to help me with my children that were still living at home. These were complications and challenges that I did not imagine as a 22-year-old getting married. Watching Enough Said, a story of two divorced people trying to connect romantically when they are both mature and wise in the ways of the world, reminded me that love at mid-life is totally different from the star-crossed love of youth.

In Enough Said, Eva, a masseuse and a divorced mother of a teenage girl, meets Albert, also divorced and the parent of a teenage daughter. Although not initially attracted to one another, they date and a relationship develops. Concurrently, Eva takes on a new client, Marianne, a poet who has also been through an unpleasant divorce. Eva and Marianne commiserate with each other, during which Marianne unloads all the idiosyncratic shortcomings of her ex. Eva and Marianne become fast friends until Eva discovers that Albert is Marianne’s former husband.

Instead of revealing this to Marianne, she prods Marianne with questions about her ex-husband to learn more about Albert. She is worried that Marianne may be right in her assessment of Albert and she may be wrong. Having gone through divorce once, Eva does not want to set herself up for another mistake.

Things come to a head when Eva’s duplicity is revealed to Marianne and Albert, whereupon Eva’s relationship with both of them dramatically changes. Enough Said begins as a comedy but becomes a serious meditation on second marriages and honest communication between couples and friends.

Second marriages pose special challenges. Both parties come with lots of baggage from the previous relationship. Moreover, stepchildren are a wild card since they often are unwilling to accept the new spouse. In divorce, you are building upon an edifice of ruins. In a first marriage, two people often are driven by intense emotion in response to physical desire and do not fully consider compatibility of dispositions and shared values. An unsuccessful first marriage is a reminder that passion alone does not make for a happy union. The first match may be ordained from Heaven, but that does necessarily mean it will be a happy union.

The Sages say that the success of one’s second marriage is dependent upon one’s merits, and it may be a more accurate indicator of long-term stability and happiness if it is not defined by the body but by the mental and emotional components of a relationship. Albert is overweight and Eva is no longer the svelte person she once was, but both recognize at this point in their lives that marriage transcends the physical. It endures when it connects the mind as well as the flesh. Interestingly, the commandment to love one’s neighbor as oneself is interpreted, in the view of the Talmud, to refer to one’s spouse, who ideally should be one’s best friend, not only one’s lover.

It is not good for man to be alone, says the Bible. Solitude breeds all kinds of emotional distress. Whenever possible, say our Sages, one should remarry after divorce or the death of a spouse. Connection with other human beings enriches life, for it reminds us to focus not selfishly on oneself but on significant others in our lives. Enough Said cautions us that relationships can weather many storms when they are founded on emotional, not just physical, compatibility and on honest communication.