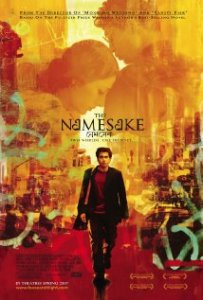 A friend of mine lamented that his son never asks him for advice. He wants to be relevant in his son’s life, but throughout his teen years and into adulthood his son has never consulted him about important life choices. The present reality is that his son has made many mistakes in life. He is now unemployed, devoid of savings, and is unmarried. The father yearns to be mentor to his son, but his son is not interested. I was reminded of this as I watched The Namesake, a wise narrative about a man born in India, who journeys to the United States for his education and for a job.

Ashoke Ganguil is very much an Indian at heart, but circumstances compel him to see his destiny in America. Although he marries Ashima, an Indian girl, they move to America where they raise their children, a boy, Gogol, and a girl, Sonia.

The film chronicles Ashoke and Ashima’s adjustment to a new land, which includes a gradual emotional separation from their parents and their ethnic traditions. A sore point between the father and son is the bestowing of the name Gogol on his son. His son has heard many times that his father considered Gogol a great writer and that is why he bears his name. However, Ashoke hints at various times that there is deeper reason for giving his son that strange name.

When the adult Gogol brings his girlfriend to meet his parents, Ashoke senses that the time to engage his son in meaningful conversation is dwindling. Ashoke insists upon having some private time with him to explain why he gave him the name Gogol. Ashokke wants to talk to him heart to heart, free of any distractions. He takes Gogol for a drive and stops to share the story of the origin of his name with him.

As he was was riding in a train in India many years ago, he was reading Gogol’s famous short story “The Overcoat.“ Another passenger noticed how wrapped up he was in the book and encouraged him to travel, see the world, and learn about life first-hand. Ashoke responded that this is what books are for. They allow you to travel to faraway places and still stay where you are.

The next moment the train crashes and his fellow passenger is killed along with many others. Ashoke miraculously is saved; in the hospital recuperating, he resolves to see the world up close, not through books. The trauma of almost losing his life while reading Gogol made him want to memorialize the moment, and so he named his son Gogol to always remember his good fortune at being rescued from almost certain death.

At that moment, Gogol begins to see his fatherly differently. He is no longer the titular head of the family; he is the wise man who is sharing wisdom with his son. He wants to leave him a meaningful legacy. He wants to teach him the value of life, the supreme value of time. The name Gogol transmits this life-affirming message.

The Torah, the repository of Jewish wisdom, is to be transmitted from generation to generation, from father to son. The Sages compare Torah to a living tree that gives spiritual sustenance to all who study and practice it. The father is the agent of that transmission. Just as a mother innately wants to nourish her child with milk, so does the father want to nourish his child with wisdom, for wisdom shared grows exponentially. The reality, however, is that children are often not ready to listen.

The wisdom of Mark Twain is relevant, for it advises us to shift our paradigms when it comes to parental guidance. He observed: “When I was a boy of fourteen, my father was so ignorant I could hardly stand to have the old man around. But when I got to be twenty-one, I was astonished at how much the old man had learned in seven years.”