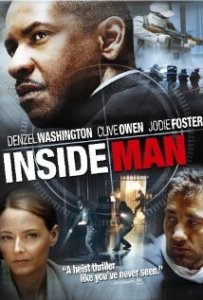 When I was a school principal, one of my students was involved in a heist. It was not a bank heist but the heist of Cokes from a soda machine. To find out who was pilfering soda from the machine, one day I hid in the lunchroom after lunch was over. I soon caught the offending student with his hand in the machine pulling out a soda bottle. I expected to find a student from a poor family committing the deed, but it was the child of a wealthy family. I learned that when it comes to ferreting out people who steal, I can’t make easy assumptions about who did the deed. Moreover, I can never fully know what motivates people to act dishonestly or how the criminal mind works. This perspective on criminals came to mind as I watched Inside Man, a very clever heist movie.

I have seen many heist movies over the years, but Inside Man is perhaps the best. In truth, it is a movie about a bank robbery but no money is stolen. There are other matters afoot, and the robbery is the cover for a crime of a different sort; it a fascinating game of cat and mouse that leaves the viewer constantly wondering what is the real purpose of the heist.

The film begins innovatively. Dalton Russell speaks to the audience informing them he has just committed a bank robbery. He then explains the “who, the what, the where, the when, and the why” of it in very simplistic terms, and now all that all he has to do is describe how the robbery was done.

The robbery begins when a group dressed as painters enter a bank in the Wall Street neighborhood of Manhattan. They shut the bank’s doors and disable the bank’s security cameras before anyone realizes what is happening. Donning masks, they order the customers and employees to fall to the floor, threatening death to anyone who disobeys. They then herd the hostages into one room and tell them to undress and don painter’s suits and masks, thus making them indistinguishable from the robbers.

As the robbery progresses, Dalton makes many demands of Frazier. He requests a bus, a plane, and he even asks for the answers to a riddle. It eventually becomes clear to Frazier that Dalton is merely stalling for time and is in no rush to exit the bank. When the siege of the bank finally ends and the police storm the building, the hostages run out of the bank dressed as the criminals, making it impossible for the authorities to distinguish between the good guys and the bad guys.

The denouement follows the actions of Frazier as he tries to put the pieces of the puzzle together, ultimately figuring out what actually was stolen and why. It is a fascinating trip, in which Spike Lee, the director, finds ample opportunity to upend traditional stereotypes of blacks, Jews, and Muslims, subtly reminding us that what is on the surface is not always what is inside a man’s heart.

In this sense, the title Inside Man suggests a double entendre, which is very much a part of Jewish tradition. The Ethics of the Fathers notes that we should never judge a man by what is he appears to be on the outside. Rather, judge by what is on the inside. The “inside man” is the one who really counts.