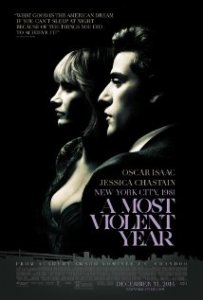 There have been times in my life when I wanted to respond to a provocation, but I realized that any response of mine would not solve the problem. I thought of a passage in The Ethics of the Fathers that advised me to control my response: “Who is strong? He who controls his inclination.” That is the real definition of power, being in control of one’s own emotions. Moreover, the Sages tell us “He who increases his words increases sin.” The more you talk, the greater likelihood you will say things that you will regret. All these thoughts came into my mind as I watched A Most Violent Year, the story of Abel Morales, the owner of a New York heating oil company whose integrity and self-control are tested in the crucible of city-wide violence and corruption.

Abel Morales is under pressure. His oil trucks are being hijacked, causing him to lose thousands of dollars in heating oil revenue. His drivers are assaulted and intimidated by thugs working for unknown competitors. His wife Anna encourages him to fight violence with violence, but Abel refuses to do so. At this same time, he is being investigated by the local district attorney for price fixing, tax evasion, and other nefarious practices. Adding to the pressure is a deal he has been working on for years: buying a fuel oil terminal on the East River, which will enable him to import more oil from barges and to store oil in the summer when the cost of fuel is low. Abel gives a down payment of 40% on the property with an agreement that he must close the deal in 30 days. If he fails to meet the deadline, the seller will offer the property to Abel’s competitors and keep the down payment.

As the hijackings continue, a friend suggests that Abel’s drivers carry handguns and he will provide fake permits for the weapons. Abel rejects the suggestion, fearing that any illegalities by his company will jeopardize the bank financing for the fuel oil terminal. In spite of his desire to do things legally, events transpire that threaten his company’s existence and his purchase of the terminal. Moreover, his family is the target of hoodlums who want to ruin Abel’s business.

Watching Abel trying to save his company, buy the terminal, and protect his family at the same time is a study of man in control of his emotions, always keeping his eye on his end goal and understanding that the path to that goal may be circuitous and unpredictable. In explaining his approach to adversity, he observes: “You should know that I have always taken the path that is most right. The result is never in question for me. Just what path do you take to get there, and there is always one that is most right. And that is what this is.”

There is a specific moment that captures Abel’s studied approach to dealing with calamity. It happens in a dialogue between Abel and his wife, whom he loves. She acquires a gun to protect herself and her children, but does not have a permit for the gun. Abel tells her that possession of a gun without a permit can lead to her incarceration and separation from her children. He is appalled at her ignorance of consequences, yet he controls his temper in spite of his anger. His abiding love for her and his children keep him focused and prevents him from saying anything that will permanently damage their relationship.

A Most Violent Year is not the most violent gangster film. Instead, it depicts people operating outside the law who still want to demonstrate the accouterments of civility and good behavior. Controlling one’s emotions and one’s speech are alternate ways to demonstrate power, and at times they are more powerful than using a gun.