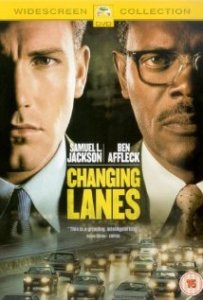 When I call up people to get information I need, the conversation begins with this question: do you have time to talk now? If the answer is no, I say I will call later.

I am very sensitive to time issues because I value time. I count my minutes and struggle to make the most of whatever time is available. Inwardly, I am upset when I am involved in a conversation that goes nowhere and that simply keeps recycling the same stuff.

The value of time is immense and can sometimes make a profound difference in outcomes. Such is the situation in the tense thriller Changing Lanes, which considers the calamitous results of being late when an important matter needs to be resolved. Minutes can make the difference between success and failure at business and in life.

Gavin Banek is a successful lawyer. His agenda for the day is to go to court to file a power of appointment showing that a wealthy man on the verge of death assigned the administration of his charitable foundation to Banek’s law firm. The man’s daughter is contesting the appointment, arguing that her father did not know what he was doing when he signed the papers Banek gave him.

Across town Doyle Gipson is also on his way to court. His agenda: to gain custody of his children and prevent his wife from moving to Oregon with his kids. Banek and Gipson get into a fender bender on the FDR Drive in New York, and both are delayed from arriving at their destinations. In a rush Banek offers Gipson a blank signed check to pay for damages; he does not want to take the time to fill out a police report and insurance claim.

Gipson, a recovering alcoholic, wants to play by the book and does not accept the check. He wants “to do the right thing,” but Banek does not let him. Instead, he leaves the scene of the accident, with Gipson stranded with a flat tire.

When Gipson arrives at court twenty minutes late, he discovers that the judge has already ruled against him in the case. Failure to appear on time has devastating consequences for him and for his relationship with his family.

When Banek arrives in court, also late, he realizes he dropped the critical power of appointment document and he guesses that Gipson may have it. Thus, a scenario is set up where not being on time changes the destinies of both men. These basically good men are tested by a host of adverse circumstances and allow anger to drive them to outrageous acts of revenge.

Changing Lanes is a film with many messages. It reminds us not to let anger dominate our responses to provocations. Once angry, we lose control over outcomes. Furthermore, it reminds us of how important it is to keep our time commitments, for this affects not only our lives but the lives of others as well. When Banek offers to pay Gipson money to make things right, Gipson excoriates him: “Money. You think I want money? What I want is my morning back. I need you to give my time back to me. Can you give me back my time? Can you give my time back to me?”

The film reminds us that although people make terrible mistakes, reconciliation and forgiveness are still possible. In many cases, errors can be rectified. Ill will can turn into friendship and good will.

Jewish tradition is very clear on matters of repentance. If a person injures another either physically, financially, or emotionally, there is a road back. All he has to do is acknowledge his mistake, resolve not to do it again, and ask the injured party for forgiveness. In a mood of calm thoughtfulness, bridges of peace can be built over the most raging of rivers.