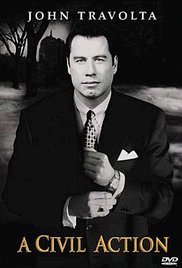 Many years ago, I asked a lawyer whom I respected what was his specialty. His answer: money. It was an “aha” moment when I realized that law is not always synonymous with justice, and that what often determines a legal outcome is how much money is at stake in terms of potential gain for the attorneys working on the case.

The conversation reminded me why lawyers generally don’t want a case to go to trial. It is simply too expensive in terms of time and effort spent. Jan Schlictman, the protagonist of A Civil Action openly states this at the beginning of the film: “Odds of a plaintiff’s lawyer winning in civil court are two to one against. Your odds of surviving a game of Russian Roulette are better than winning a case at trial. So why does anyone do it? They don’t. They settle. Only fools with something to prove end up ensnared in it.”

This is the mindset that opens A Civil Action, an insightful film about one lawyer’s quest to right a wrong in Woburn, Massachusetts, a city where environmental toxins dumped into the river have contaminated the area’s water supply, causing the death of a number of children.

Woburn resident Anne Anderson contacts attorney Jan Schlictman’s personal injury firm to take legal action against those responsible for the contamination. At first Schlichtman rejects the case, but when he realizes that the contamination is a major environmental issue and there are a couple of deep pockets who can be sued for millions, he changes his mind and accepts.

Money is his motivator, but slowly he takes a personal interest in the case, especially when he begins to share the grief of parents who have suffered the profound loss of their children. He becomes a legal crusader on a mission, working long hours with no regard for the financial toll it is taking on his partners or himself.

The plaintiffs, in truth, are not interested in a monetary settlement. They simply want their city’s water supply cleaned up and an apology from the companies that created and contributed to the problem. Initially, the companies are willing to settle and grant the plaintiffs a large sum of money, but the companies do not want to admit culpability. Indeed, they are not depicted as unscrupulous people, just businessmen who want to protect their financial interests.

Jan tries his best on behalf of the plaintiffs in presenting this class-action lawsuit, but the companies’ opposition is strong and not easily overcome. Various settlements are suggested along the way, but Jan is unmoved. He sticks to principle even when there is great cost to him and his fellow firm members, who did not anticipate or desire to pursue a trial instead of a settlement. How this all turns out makes for a mesmerizing courtroom drama. It also gives the viewer an insight into the nuanced complexity of the American judicial system.

In stark contrast is Judaism’s rabbinic court system, which adjudicates civil disputes. The court consists of a panel of three judges, chosen from among a pool of scholars who are experts in Talmud and Jewish law. In general, the court takes no fee and does not take a donation or gift from any party using its services. It seeks to avoid long-term litigation, which only serves to fill the coffers of lawyers who want to profit from their clients. The case is in question is looked at from the perspective of the codes of Jewish law and specific case law that is relevant to the issue being discussed. After thorough analysis, a decision is given with the clear expectation that both sides of the dispute will agree with the outcome no matter who wins. Money does not rule; justice does.

A Civil Action portrays a nuanced view of how our legal system works. There are no evil judges or lawyers. There are only people who want to protect their financial interests. When we realize that our adversaries are often people like us, then solutions, albeit imperfect, can be found to the thorniest of problems.