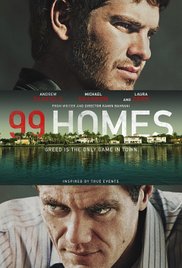 A family member recently bought a foreclosure home in Florida. A foreclosure is a home owned by the bank because of the failure of the owner to pay his mortgage. From a distance, it looks great for the new purchaser who can acquire a home at a very favorable price; but, up close, a foreclosure has a dark side and can signify a very human tragedy. This is depicted in 99 Homes, an unsettling look at the consequences of foreclosure on decent people who, for a variety of reasons, can’t make ends meet.

The film opens as single father Dennis Nash has just been released from his construction job. His finances are in disarray and, as a result, he, together with his son Conner and his mother Lynn, are evicted from their Orlando, Florida home. In charge of the eviction is realtor Rick Carver who works with the police to enforce the eviction. When Nash pleads for more time to get the financing for his home which has been in the family for generations, Carver coldly tells him: “Don’t get emotional over real estate.”

Dennis is compelled to move to a shabby motel where he can provide at least some measure of protection for his mother and son. When he goes to Carver’s office to reclaim tools that were stolen from him by Carver’s workers, he impresses Carver with his willingness to act forcefully to retrieve them. Carver then decides to hire Dennis as a repairman for his properties.

Dennis, desperately needing the money, accepts the offer. Over time, however, Rick charges Dennis with helping with evictions, and so Dennis becomes a willing accomplice to all the nefarious schemes of Carver, which skirt the law and exploit the situation of homeowners struggling mightily to keep their houses.

As Dennis’ income grows, his conscience troubles him. He knows that he is becoming rich at the expense of those less fortunate who do not have the means to contest the evictions in court. His moral crisis comes to a head when Dennis has to evict a friend of his. Much is at stake.

The eviction of a large number of property owners in a particular neighborhood will give Carver access to lots of real estate deals totaling millions of dollars. But there is a dilemma for Dennis: he must deliver a false document to the court to substantiate Carver’s legal shenanigans to deprive people of getting justice in a court of law.

When we think of foreclosures, we first surmise that the people whose homes are foreclosed have been financially irresponsible. They are simply reaping the negative consequences of what they have sown over the years. However, the Talmud cautions us “not to judge people until you are standing in their place.” One cannot fully understand the trauma of losing a home or the reasons why one loses a home unless that person has experienced a similar crisis.

Moreover, the Ethics of the Fathers states: “The world is founded on loving kindness.” This means that in all of our interactions with people, we should be kind and empathetic. Even if we have to be the bearer of ill tidings, we should fulfill our mission with sensitivity and compassion. Dennis tries to do this, but Carver is only interested in the final financial outcome of a negotiation; inwardly, he does not care who he hurts. His cold, heartless demeanor is encapsulated in a speech he gives to Dennis: “Don’t be soft. America doesn’t bail out the losers. America was built by bailing out winners. By rigging a nation of the winners, for the winners, by the winners.”

99 Homes is not an easy movie to watch as we observe simple folk coming face to face with financial, and in some cases emotional, ruin. It is a cautionary tale reminding us to be honest, to be kind, and never to trample on the rights of others.