The Incredibles (2004), directed by Brad Bird 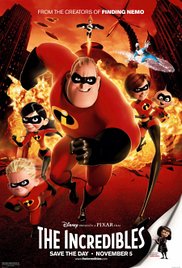 My oldest son, Rabbi Daniel, has recently written a book entitled What Will They Say About You When You Are Gone: Creating a Life of Legacy. Much of the book emerges from eulogies that he has delivered during the past 25 years as a synagogue rabbi. A consistent theme over the years is the good that people do anonymously, without any recognition or fanfare. Such good deeds done, below the societal radar, testify to the essential goodness of the deceased. Doing good without being recognized for it is at the heart of The Incredibles, an imaginative animated film that deals with superheroes who want to do good without receiving accolades. They just want to be helpful and do the right thing.

The main superheroes in the film are Mr. Incredible, who possesses super strength, Elastigirl, who can stretch her body like flexible rubber, and Frozone, who has the ability to create ice instantly. The opening scenes depict the heroes in a series of events where they are called upon to use their superpowers to catch criminals. They are almost entirely successful except in one case when they are foiled by Buddy, an enthusiastic fan of Mr. Incredible, who wants to be his ward like Batman’s Robin. It is his interruption that prevents Mr. Incredible from capturing the culprit.

After the excitement, the superheroes return to their alter egos and lead normal lives. Mr. Incredible is Robert Parr, Elastigirl is is Helen Parr, Robert’s wife, and Frozone is Lucius Best, Parr’s close friend.

Their lives are turned upside down when an avalanche of lawsuits are filed against the superheroes because of civilian injuries and collateral damage. Eventually, the superheroes conclude that they have to turn in their super suits and live normal lives away from the limelight, and assume their secret identities permanently. The Superhero Relocation Program provides ex-superheroes with new jobs and homes and amnesty for past actions.

The narrative continues 15 years later with Robert working for an insurance company, leading a life focused on his wife and children. However, he still dreams of his superhero years when he saved many people from disaster.

Soon an opportunity arises for him to return to his calling as a superhero. For a hefty sum, he is asked by Mirage, a mysterious woman, to destroy a rogue robot who is wreaking havoc on the residents of a remote island. However, Mr. Incredible soon discovers that his job is a ruse simply to get him to the island where Mirage’s anonymous employer terminates the lives of all the existing superheroes. The race to save himself and other superheroes makes for a tense and exciting denouement, in which Elastigirl, Frozone, and Mr. Incredible’s children play key roles.

A character trait that stands out among all three superheroes is their lack of interest in public acclaim. None of them is seeking recognition of any kind. They only want to help other people. This is a Jewish sensibility. In The Ethics of the Fathers, Jews are instructed to serve God, to do the right thing, without any intention of receiving reward. Moreover, Maimonides, in describing the eight levels of charity, writes that giving anonymously is one of the highest forms of charity.

It is significant to note that Mr. Incredible’s adversary is motivated primarily by a strong desire for recognition. He purposely destabilizes the world so that he can arrive on the scene and put it back together again in front of a large audience. He is a villain who thrives on the aphrodisiac of fame. The Incredibles reminds us that doing good things is more enduring than transient fame.