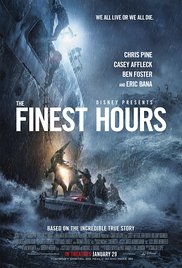 Rescue missions are inherently unpredictable. In Israel there are many rescue narratives, the Entebbe rescue being the most famous. Before any rescue attempt is made, the plan is intensely scrutinized to obtain the optimum results: saving those in danger and making sure no one, including the rescuers, gets hurt. That is why the Entebbe rescue is so highly praised. The lives of ninety-four hostages, primarily Israelis, and the 12-member Air France crew were in jeopardy, all of whom were threatened with death. As a result of the 90-minute Israeli operation, 102 were rescued.

In The Finest Hours, there is a crisis of a different sort that is the catalyst for the rescue mission. It is February 18, 1952, near the coast of New England. An oil tanker, the Pendleton, on a stormy winter night suffers a hole in the ship, allowing in huge amounts of water. The dilemma: how to keep the ship afloat until rescuers come. Ray Sybert, the ship’s engineer, recommends that they try to run the boat aground to keep it afloat. Moreover, the challenge of the rescuers is enormous because of the inclement weather and raging sea.

Bernie Webber, a Coast Guard seaman, is tasked by his superior to take out a large motorboat and rescue the tanker’s crew. Three brave men accompany him. The waves almost capsize their boat, but miraculously they get beyond the fierce waves and continue towards the tanker.

Once the Coast Guard crew finally arrives at the sinking ship, they realize that there is not enough room on the boat for all the sailors. However, they persist in trying to get all the men on board. Most make it to the rescue boat. Once the last man hops on board the Coast Guard boat, the Pendleton sinks.

In the melee of trying to rescue the men amidst torrential rains and waves, the Coast Guard crew loses its compass. How they find there way back in the dark is a minor miracle, and the viewer rejoices in their success against all odds.

Jewish tradition tells us that it is a good deed to save someone’s life. It is derived from the Biblical commandment ‘You shall not stand aside when mischief befalls a neighbor (Leviticus 19:16).” We are responsible for our neighbor’s welfare. This commandment is an extension of the commandment to love one’s neighbor as one would love himself. The question arises, however, to what extent should we put our own lives in jeopardy to save someone else’s? This is the scenario on The Finest Hours in which Bernie Webber and his Coast Guard crew knowingly endanger their own lives when they attempt to rescue the crew of the Pendleton.

Rabbi Eliezer Melamed, quoting the Talmud and Codes of Jewish Law, speaks of two approaches to this dilemma. The first is to consider the level of risk and not be overly cautious when it comes to evaluating whether a rescue attempt will fail or succeed. When human life is at stake, we should be willing to assume some level of risk and not be apathetic to a cry for help, even if it means endangering ourselves.

The second approach is to take great risks when it comes to saving another person’s life. The Sages say that entering into great danger is justified is there is at least a fifty per cent chance of success. This means that both the rescuer and the person whose life is immediately threatened will survive. Saving the life of another is considered an extreme act of kindness, for which there is much Divine reward.

The Finest Hours, in exceptional visual terms, recounts one of the greatest small boat rescues in the history of the Coast Guard. It skillfully dramatizes the tactical and emotional challenge faced by Bernie Webber and others to encounter personal peril when that is what is required to save human lives. Bernie does not take the easy way out; rather he courageously confronts danger and becomes a hero worth emulating.