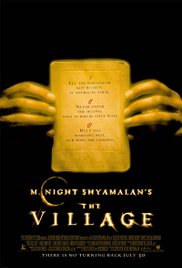 I live in a city in Israel where there are many charedim, ultra-Orthodox Jews. I do not wear the same clothes as they do. They wear mostly black coats and white shirts and live in a different neighborhood. But occasionally I meet them in the local synagogue since both of us are obligated to pray with a quorum of ten men, a minyan, three times a day.

This attitude is similar to the attitude of the inhabitants of a 19th century community in Pennsylvania depicted in The Village, a film that explores the consequences of leading an isolated life without interactions with the larger world around it. The surrounding woods are forbidden to the villagers because they are populated by harmful demons.

One day, however, a young man dies because of a lack of medicine to treat him. This motivates Lucius Hunt, a sincere and kind member of the community, to offer to travel to the “towns” to bring back medicine to prevent another tragedy. The elders reject his request.

Lucius is troubled by the lack of openness of the elders and their secretive ways. In particular, he is interested in knowing the origins of their isolated community, but the elders do not respond positively to his desire to explore the world beyond the village.

Lucius, reticent and shy, forms a friendship with Ivy Walker, an attractive girl who has been blind since a very young age. Their relationship becomes romantic and Lucius and Ivy decide to marry. Tragedy strikes when Lucius is mortally wounded. The only remedies that can possibly save him are medicines from the ominous towns that threaten the existence of the village. Furthermore, it is only Ivy who volunteers to make the treacherous journey to secure the needed medicine for Lucius to survive.

There is a community dilemma. If Ivy goes, there is a possibility that the secret of the community’s existence will be discovered and the community’s way of life will cease to exist. If she does not go to get medicine, Lucius will probably die of his wound.

Herein lies the dilemma facing the ultra-Orthodox Jews as well. Isolation is a positive value because it enables them to maintain their unique lifestyle in a world where moral rudders are absent. However, isolation makes them vulnerable because they never learn how to function in the modern world or how to take advantage of the good things the modern world offers. Either option presents risks. The question is which risk do you prefer. Or is there a balance to be struck between the two?

Footsteps, an organization founded in 2004, attempts to help the ultra-orthodox who have left the fold to adjust to the modern world without necessarily abandoning the old one. For the first time, these people are discovering themselves anew and wrestling with new freedoms. These new freedoms sometimes are corrupting and lead to further estrangement from family and friends. At other times, they enable people to enter the modern workplace, obtain jobs, and learn skills that enable them to survive in an unfamiliar world. Footsteps tries to be a bridge between those two worlds.

The Village illustrates the perils of isolation, even when it is understandably motivated for good reasons. The best answer, reflected in the response of the inhabitants of the village to Lucius’s grave condition, is to find a balance between the ideal and real worlds.