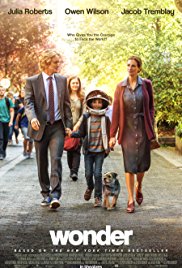 When I was principal of an elementary school, I saw bullying for the first time. We had a black Jewish student, a very sensitive and gentle boy, enrolled at the school. He had trouble making friends, sensing he was different from the rest of the students.

On one fateful day, a number of his classmates lured him into the boy’s bathroom and beat him up. The boy’s parents were rightfully very incensed that such behavior could occur in a Jewish day school, but it did and I had to deal with it administratively. The entire event reminded me of the need to express to all students that everyone is created in the image of God and possesses infinite potential, no matter what their appearance.

Such is the dilemma facing facially disfigured Augie Pullman as he tries to adjust to a regular school in the fifth grade after being home schooled by his mother Isabel until then. Augie’s condition is a result of a genetic flaw and, after many surgeries, he is healthy but his face is deformed.

During his first several days at the new school, he is shunned by the other students who are put off by his strange looks. In time, some students do befriend him. However, Augie travels a rocky social road, and some of his supposed friends turn on him when it suits their own social needs for acceptance. Happily, there is reconciliation, and the sincere friendship of classmates combined with the consistent support and love of his parents enables Augie to cope with temporary adversities and enjoy normal school life.

Wonder is filled with wise sayings articulated by Augie, his parents, his teachers, and his school principal, Mr. Tushman. Many of these echo Torah perspectives on life. Here are some of them: “Courage. Kindness. Friendship. Character. These are the qualities that define us as human beings, and propel us, on occasion, to greatness.”Top of Form “I think there should be a rule that everyone in the world should get a standing ovation at least once in their lives.” “It’s not enough to be friendly. You have to be a friend.” “I wish every day could be Halloween. We could all wear masks all the time. Then we could walk around and get to know each other before we got to see what we looked like under the masks.” “It’s what you’ve done with your time, how you’ve chosen to spend your days, and whom you’ve touched this year. That, to me, is the greatest measure of success.”  “If you don’t like where you are, picture where you want to be.” “Who do I aspire to be?  That’s the question we should be asking ourselves all the time.” “When given the choice between being right or kind, choose kind.” “We all have marks on our face.  This is the map that shows where we’ve been and it’s never, ever ugly.” “Your deeds are your monuments.” “Greatness is not being strong but using strength to carry the most hearts.”

Perhaps the most powerful statement is the one that speaks of the absolute need to see people in their complexity and not simply to form judgments about people based only on how they look. Mr. Tushman tells his students at an assembly: “Auggie can’t change the way he looks.  Maybe we can change the way we see.”

Wonder is a one-of-a-kind movie, loaded with important statements about how we should lead our lives and how we should interact with the people we meet. It is both entertaining and enlightening. For me, it represents an ideal “kosher movie” for our times.