Their Finest (2016), directed by Lone Scherfig 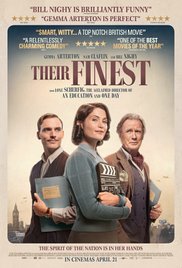 When I was about to enter college in 1960, I thought I was going to be a high school teacher. Somewhere along the way, my Judaic studies at Yeshiva University became my academic focus and I resolved to be a pulpit rabbi. My professional career began in Atlanta, Georgia, where I was the assistant rabbi at a large Orthodox synagogue.

In 1976, I began searching for a rabbinical post where I would be the head rabbi. But God intervened in my career path. Even though I had no experience running a Jewish day high school, I was offered the position of principal of Yeshiva High School of Atlanta.

How and why that occurred is not the subject of this film review, but how one chooses a career is. What are the factors that make one choose a career for which one does not prepare?

Their Finest tells the story of Catrin Cole, who in 1940 is requested to interview with England’s Ministry of Information to write scripts for short documentary films about the war effort. While researching a story about twin sisters, Lily and Rose, who are reputed to have sailed their father’s boat to participate in the Dunkirk evacuation, she discovers that their boat had engine trouble and never reached Dunkirk.

Instead of abandoning the story, Catrin, together with co-script writers Tom Buckley and Raymond Parfitt, convince their superiors to continue with the movie as inspirational fiction rather than as a documentary. And so, Catrin finds herself as a scriptwriter not for documentaries but for major theatrical productions. She did not plan this career, but once given the opportunity to spread her intellectual wings, she soars above the rest of her scriptwriting colleagues.

As the shoot continues, Catrin and Tom develop affection for one another as they successfully produce a film that inspires the British nation who are suffering from war fatigue. Tragedy intervenes, however, in the relationship between Catrin and Tom, compelling her to rethink her newfound success as a scriptwriter, a vocation for which she did not prepare, but which ultimately gives meaning and direction to her life.

Rabbi Benjamin Rapaport, referencing Duties of the Heart written by Bachye Ibn Pakudei around 1040, provides some questions to help one find the right career. Here are four of them: Does it attract you? Does it match your resources? Are you willing to invest? Do you have a passion for it?

Catrin Cole at first does not affirmatively answer these questions, but after she is baptized in the crucible of scriptwriting as a career, she truly discovers her life’s calling. She senses her writing will enable her to make a better world, or in Jewish terms, to do tikun olam, to improve and fix the world.

There is another valuable life lesson that Catrin learns about her career. Sometimes your career choice requires you to see the world differently. In particular, working in the arts might force you to see truth not objectively, but as artistic truth. Tom Buckley explains this to Catrin: “Film is real life with the boring parts cut out. Don’t confuse facts with truth, and don’t let either of them get in the way of the story. Why do you think people like films? It’s because stories are structured, have a shape, a purpose, a meaning. And when things go bad, they’re still part of a plan. There’s point to them. Unlike life.”

Their Finest ends on an optimistic note. After personal tragedy, Catrin resolves never to write again. However, Ambrose Hilliard, a veteran actor, reminds her that if she turns her back on opportunities that come her way, even when she has suffered great loss, “wouldn’t that be giving death dominion over life? “ Catrin understands the power and significance of his words and returns to her chosen craft of scriptwriting, where she can continue to influence the world for good.

Posted in Drama, Movie review, Romance. Bookmark the permalink.
← A Dog’s Purpose (2017), directed by Lasse Hallstrom
The Fault In Our Stars (2014), directed by Josh Boone →