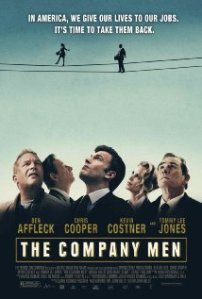 As a person in the professional rabbinate, both pulpit and educational, for most of my life, I have developed many friendships over the years. It is part of the job that I befriend people, and people generally respond positively to a rabbinic presence. For that I am very grateful. But there is another side to the professional rabbinate: it is a lonely profession. At times of crisis, the rabbi is not at ease going to the layman for comfort and counsel. Therefore, the strength of the rabbi’s family relationships are key to weathering a storm. In truth, this is what happens when anyone goes through a trying time. When his relationship with his spouse and family are strong, it is likely that challenges of any type can be overcome. When they are not, things can deteriorate quickly. A case in point is what transpires in The Company Men, an engrossing look at what happens to men who suddenly are fired from their highly paid jobs and find themselves trying to reinvent themselves in a very competitive job market.

The film opens with panoramic views of beautiful suburban homes occupied by the company men. They are decorated tastefully and contain the latest technological innovations for the home. Expensive cars line the driveways, and prosperity is in the air. In the midst of this affluence, many of the company men are given their walking papers due to downsizing in a turbulent economy. The two case studies in the film are Bobby Walker, played by Ben Affleck, an aggressive and successful account executive, and Phil Woodward, played by Chris Cooper, a middle manager who has moved up from the shop floor to corporate office. Woodward, in his 50s, finds himself unemployable. It is sad to watch him as he faces many rejections. His malaise deepens because his wife is not present for him emotionally. She lives in her world of affluence and comfort, while he retreats into depression. Walker, in his late 30s, at first finds it difficult to give up the accoutrements of wealth and is especially upset with the loss of his country club membership, his expensive car, and eventually his home. However, his wife is a pragmatist who deeply loves him. She understands the reality that the family faces and takes charge, readily cutting expenses to preserve that which is important in their lives: love and family.

In a touching scene in which Walker reveals his darkest fears of failure and inadequacy, his wife embraces him and reminds him of the blessing they have in their children. She looks him straight in the eye and forcefully tells him: “You are going to find a job….You have your parents. You have me.” She, through her encouragement and love, enables her husband to refocus and understand what our Sages have said hundreds of years ago: “Who is wealthy? He who is content with his lot.” The aphorism reminds us that who we are is more important than what we possess. The Midrash (Kohelet Rabbah 5:20) speaks of man entering the world as a baby with fists clenched and leaving the world with open hands as emblematic of life’s arc. As young people, we want things. We identify ourselves with what we own. As we mature, we understand that things cannot come with us to the grave; therefore, our palms are open, no longer holding on but letting go.

The Company Men is a cautionary tale, which calls to mind that the most important things of life are not what we own but the intangible, loving relationships that give every day meaning.