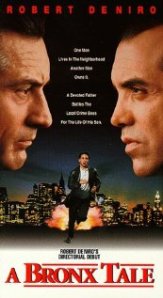 When I served as principal of Yeshiva High School of Atlanta, I was always interested in discovering ways to become a better principal. One influential book I read was about Frank Boyden, who, for over 60 years, was the headmaster of Deerfield Academy, a prestigious private high school in New England. The essential idea behind his supervisory style is MBWA, management by wandering around. This meant that a principal should not squirrel himself in his office, but rather be a ubiquitous presence in the hallways and classrooms of the school. A sure path to administrative mediocrity is to isolate oneself from his students. A token of his total involvement with his pupils was his placement of his desk in the corridors of the school. He wanted to be visible to his students. Boyden’s story was inspiring, and for a brief time I also situated my desk in the hallway to be more available to my students.

The memory of this management approach resurrected itself as I watched A Bronx Tale, a profanity-laced coming of age story of growing up in a mobster-infested neighborhood of the Bronx in the 1960’s.

Calogero, a young boy with Sicilian roots, is raised in a loving and ethically focused home by his hard working parents, but he is entranced by the charisma of the local Mafia boss, Sonny. For a number of reasons, Calogero, later called “C,” sees Sonny as his surrogate father and begins to emulate his ways, and Sonny views C as the son he never had.

In one telling encounter, Sonny reveals to C that he learned his management style from Machiavelli, the celebrated Italian author of The Prince, a wise and ruthless treatise on how to gain and keep political power. Machiavelli always wanted to be close to his enemies to prevent their plots against him. His ubiquitous presence, or as Sonny terms it, his “availability,” placed him in the best position to control events around him. When C asks him whether it is better to be loved or feared, Sonny tells him it is better to be feared, for ultimately that is where the power is.

What does this have to do with supervising a school or management in general? In managing any enterprise, those in management positions sometimes are compelled to assert their authority and tell people things they do not want to hear, to be the bearer of ill tidings. But that is what a supervisor occasionally must do. It is not pleasant, but it must be done. Although we want people to love us, this cannot always be.

The Torah tells us that the mourning period for Aaron was longer than for Moses because the people loved Aaron more. He loved peace and pursued peace. In contrast, Moses was the law giver, the one who gave rebuke and correction to the people. He was respected but not necessarily loved.

The message of the Torah is love others, but to know that there are times when fear and respect are called for. Nowhere is this more relevant than when we function as parents. We want our kids to love us, but we have to strike a balance between love and fear. That is why the Torah expresses the commandment of honoring parents twice, to manifest the balanced way we have to parent.

A Bronx Tale, grounded in the violent and crime ridden streets of New York, obliquely echoes the reality of parenting with different paradigms and, more directly, the reality of successfully managing any important enterprise with a blend of love and authority.