← A Simple Twist of Fate (1994) directed by Gillies MacKinnon
Crimes and Misdemeanors (1989), directed by Woody Allen → 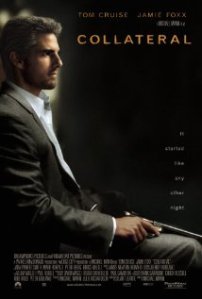 As I scan the news every day, I see a recurrent theme. People who commit terrible crimes want very much to seem normal, regular guys who just want to preserve peace and order. In Syria where thousands are being killed by government forces, President Assad in a TV interview projects moderation and reason. Recently in Iran, leaders project charm and openness to the world while at home anyone who veers from the party line is subject to harassment or death. The politicos always want to portray themselves as reasonable men who are doing reasonable things, even if this means the murder of many innocents. I was reminded of this as I watched Collateral, a tense thriller in which a paid assassin conducts himself like an ordinary Joe.

The film begins when Max, a cab driver in Los Angeles, picks up Vincent, a friendly passenger, who offers him $600 to drive him around throughout the night as he makes a number of stops. Driving through Los Angeles, Vincent observes that the city is impersonal with no one really caring for one another. He shares a vignette with Max about a dead man on a subway who wasn’t even noticed by the other travelers. The viewer senses that Vincent really cares about the abandoned and forgotten. As the night wears on, however, we learn that Vincent is a paid assassin and at each one of the stops, he plans to murder someone. Max wants to escape after the first murder; but Vincent does not allow him to flee, and so Max’s ride with the devil begins.

Vincent executes two more people out of the five he has contracted to kill, and then orders Max to visit Max’s sick mother in the hospital. Before going up to her room, Vincent buys her flowers. Although his goal is to make Max’s delayed response to her phone calls seem normal, he goes the extra mile by purchasing the bouquet and engaging in sweet conversation with his mother. Vincent projects a solicitous attitude towards the old and infirm, but Max knows the truth and is emotionally unnerved by the sight of a confirmed killer by his mother’s bedside.

Vincent and Max then go to a night club filled with customers dancing to loud music. In the club is a heavily guarded target of Vincent’s. When Vincent attempts to assassinate the target with the FBI, the LAPD, and assorted underworld hit men in the room, a melee breaks out in which bullets fly. When someone mistakenly tries to shoot Max, it is Vincent who saves his life by killing the shooter, thereby adding another layer of confusion to Max’s relationship to Vincent.

All this gunplay and tension unravel Max, who in desperation wrecks his cab as he and Vincent make their getaway from the crime scene. When Max realizes that Vincent’s final hit is a passenger that he chauffeured earlier in the day, he goes out of his way to warn her. Vincent is determined to kill her in spite of his ambivalent feelings for Max; for at the end of the day, he is an assassin for hire, not a person who lets emotions get in the way of his mission.

The Ethics of the Fathers exhorts us to judge every man favorably, to give people the benefit of the doubt. However, once you know with certainty the evil nature of someone, you should be vigilant. As our Sages say, don’t judge anything by its outward appearance; rather judge it by its contents. No matter how charming an evil person is, that does not excuse immoral behavior. Judaism mandates that we judge people by their actions, not by their appearances.