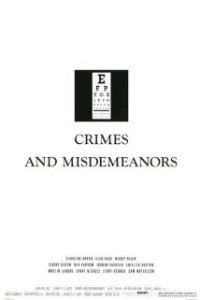 As principal of a budding Jewish day school, part of my job was to raise money as well as be the educational leader of the school; so it was with great joy when out of the blue I received a number of envelopes in the school mail box with thousands of dollars of cash. Over several months they mysteriously appeared and I attributed the gifts to an anonymous admirer and supporter of Jewish education. Several months later, the gifts suddenly stopped.

Soon after, I read in the local newspaper about the incarceration of a friend of mine for selling drugs. I never made a connection between the gifts of money and my friend’s crime until I visited him in prison some months later. It was then he confessed to me that the money he gave the school was from the profits of his drug sales. He wanted in some way to assuage his guilt and giving money to a Jewish day school was his atonement.

I was reminded of this incident as I watched Crimes and Misdemeanors, the disturbing story of ophthalmologist and philanthropist Judah Rosenthal. Judah has had an affair with a woman for several years, and she now threatens to ruin his life if he doesn’t marry her. His brother Jack suggests having the woman killed and this presents Judah with a major question of conscience: allow his life of wealth and privilege to continue or to hire a hit man to murder her. He reminisces: “I remember my father telling me that the eyes of God are on us always. What a phrase to a young boy. What were God’s eyes like? Unimaginably penetrating, intense eyes, I assumed.” At first the idea of murder is abhorrent to him, but then he equivocates. He has committed adultery, he has made incredibly stupid mistakes, but he knows that the revelation of his indiscretions to his wife will ruin him both in the eyes of his wife and the greater community. And so he decides to authorize the murder.

A parallel plot of the movie concerns Clifford Stern, a documentary filmmaker who is trying to produce a film on a great scholar who in spite of personal tragedy is able to affirm life with honesty, optimism and courage. It is his philosophy that counterbalances the sordid narrative of Judah Rosenthal. Professor Levy, the subject of the documentary, says in an interview that “we are all faced throughout our lives with agonizing decisions. Moral choices. Some are on a grand scale. Most of these choices are on lesser points. But we define ourselves by the choices we have made. We are in fact the sum total of our choices.”

Although Crimes and Misdemeanors plays like a comedy in many ways, at its core it is a deep philosophical meditation on the nature of morality in the contemporary world. In the Talmud, our Sages tell us one sin leads to another. Once we cross the line of morality and decency, we traverse a slippery slope and many sins are committed in the wake of one transgression. This is why the rabbis of the Talmud, who understood human nature profoundly,  often set up protective fences or decrees around the law to insure that the primary Biblical law is not broken.

Judah Rosenthal rationalizes his crime and it is unsettling to hear his self-analysis. First plagued by an overwhelming guilt, he hears the voice of his father who gave him a sense that God is watching him, and Judah feels that he has violated the moral universe. On the verge of a breakdown, he awakes one day and his moral crisis has vanished. Life goes on. There is no Divine retribution and he returns to his normal life.

Jewish tradition argues that guilt is sometimes good for a person and can even be redemptive. King David used guilt to spur him on to a life of good deeds and accomplishment. But David admitted his faults and did not rationalize his behavior when he sinned. It is this model that serves as a positive example for all of us who stumble occasionally as we navigate the moral choices that confront us.