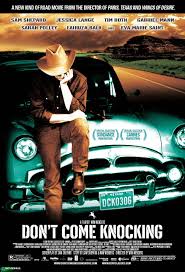 Occasionally I meet old friends whose life has passed them by. As young men, they seemed so full of promise. I thought they would be professional successes in adulthood with loving wives and children. Yet something happened along the way. They were barely making a living, had not married, and were a shell of their former selves.

They tried to keep up a happy façade, but I sensed an undercurrent of profound sadness beneath the superficial smile. That narrative arc permeates Don’t Come Knocking, the elegiac narrative of Howard Spence, an aging movie star who recklessly tossed away every opportunity to lead a fulfilling family and professional life.

The movie begins with Howard suddenly leaving a film shoot of his latest western, which is being filled in the Utah desert. He rides away on a horse, changes his clothes so that he will be unrecognizable, and decides to reconnect with his mother whom he has not seen for thirty years. He travels to his hometown of Elko, Nevada to see her.

In the interim, the movie company launches a search for him led by Mr. Sutter, an insurance executive determined to find Howard and return him to the set. For the moment, the production is stalled and cannot continue. Tension mounts on the set because for each day the film is delayed, there is great financial loss to the studio. Indeed, without Howard returning and completing his scenes, the director cannot wrap up the film. Sutter’s search for Howard is the subplot of Howard’s personal journey to find himself after years of behavioral excess.

Howard’s reunion with his mother, after thirty years of absence, is both touching and weird. They speak with a familiarity that suggests a loving and authentic rapport with each other, but Howard’s conversation with her seems like the tentative remarks of a teenager who has stayed out late one night. Howard is almost clueless about the mess he has made with his life until he peruses his mother’s scrapbooks, which contain newspaper accounts of Howard’s self-destructive behavior with drugs and women, his barroom brawls, and his movie debacles.

His mother informs him that he has a son in Butte, Montana. This piques Howard’s curiosity and he decides to find him. While in Butte, he meets Doreen, his old flame and the mother of Earl, his son. Both Doreen and Earl are puzzled by Howard’s return; they resent him intruding into their lives after an absence of twenty years.

Confronting his past is not easy for Howard either. His emotional malaise is captured in an iconic scene in which he sits on a couch that has been left abandoned in the middle of an empty street. Howard sits quietly while the camera pans around him from dusk to dawn. He is still, but everything around him is moving. The scene suggests that for many years he has not adapted to the changes going on around him. He cries, he reflects, he meditates, and finally begins to understand the price he has paid for his youthful folly.

How Howard tries to reconcile with Doreen and Earl makes for a compelling and, at the same time, an oblique family drama. Don’t Come Knocking does not have a neat ending, but it does intimate that even in the most extreme of circumstances, people can find a way to communicate and adjust to new emotional realities.

Howard Spence, after years of profligate living, begins to comprehend the damage he has inflicted on others by his casual attitude towards marriage and fatherhood. He cannot alter the past; but he can be wiser, at least in some small way, for the rest of his life.

There is a story told about a great nineteenth century ethicist, Rabbi Israel Salanter, who happened to be walking late one night in front of the home of a shoemaker. Rabbi Salanter observed the man was working by the light of flickering candle. He asked the shoemaker why he was laboring so late at night. He replied: “As long as the candle is still burning, it is still possible to accomplish and to mend.”

This is an insight that Howard gains through the crucible of painful human experience. He cannot change the past; but as long as he is alive, he can make connections in the present that make him relevant to lost loves and forsaken children.