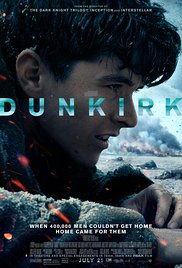 One of the many things I enjoyed during my years of serving as principal of a high school was working with a top notch staff, a group of teachers who were mission-driven, focused on doing the best for their students. They were not limited by their job descriptions. I recall that, on several occasions, we needed someone to drive a van to pick up kids to come to school for several weeks. Teachers eagerly volunteered. They understood my dilemma and just did what was needed to get the task done. They did not simply stand on the side, waiting for someone else to do the job.

This readiness to get the job done in spite of obstacles is what drives the action in Dunkirk, a tense and engaging war thriller, describing the rescue of over 400,000 soldiers who were under German fire on the beaches of Dunkirk. The success of the rescue mission depends on the work of three different groups of men, all of whom contribute to the rescue but in different ways. They include British officers and soldiers, British airmen, and local villagers with small vessels who attempt to ferry soldiers off the beach and back to England, away from enemy fire. Although the solders and the pilots have a military mission, the locals who have small boats do not. What motivates them is simply the desire to aid those in danger.

It is the officers who come up with a plan to evacuate the soldiers using civilian boats since there is no large ship to transport them. It is not a simple task, but they enlist the aid of locals to give the soldiers a chance to survive. The solders themselves attempt to shoot down attacking German planes with conventional weapons, but they are severely tested when German fighter planes zoom overhead.

It is the British airmen who provide support for the troops on the ground, but they too are severely outnumbered. In spite of this, they are able to shoot down some enemy planes and provide an opportunity for the soldiers to board the rescue vessels.

But it is the local bystanders, not compelled by law but motivated by altruism and focused on the mission, who save the day. One of the civilian vessels is commandeered by Mr. Dawson. On the way to Dunkirk, his crew, consisting of his son and a family friend, rescue a shell-shocked soldier on an abandoned ship. The soldier wants no more of war and tries to discourage Dawson from continuing on to Dunkirk. Dawson resists the pressure and sails forward, committed to the rescue of the soldiers.

Judaism has much to say about the role of the bystander who witnesses a person in danger and does not help. Aaron Kirschenbaum, Professor of Law at Tel Aviv University, writes: “In Judaism, the bystander’s duty to come to the rescue of his fellow man who is in peril is religious, ethical and legal. A citizen is expected to engage in the act of rescue both personally and with his financial resource.”

The Sages tell us that when we save the life of one person, we are in effect saving an entire world. The inspiring story of the Dunkirk rescue reminds us of our obligation to help others at a time of crisis. In this way, we bring about the spiritual salvation of ourselves and the physical salvation of others.