Close Encounters of the Third Kind (1977), directed by Steven Spielberg 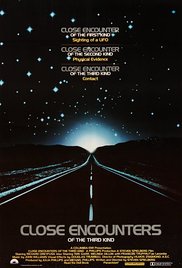 At the Sabbath table here in Israel, we often invite guests, some of whom do not speak English. When we run out of words, I find that music, Sabbath melodies even without words, can sustain the conversation. We do not have to understand one another in a conventional sense. The music and its harmonies bring us together and we are communicating on another level. Music becomes the universal language. Close Encounters o the Third Kind deals with a visit of aliens from another planet. Although they share no common language with earthlings, they are able to communicate with harmonic tones. Music brings them together.

The story begins as a cohort of government representatives from the military and the space program discover a group of airplanes in the middle of the desert. The planes were reported missing in the 1940s, and now they miraculously are found. At the same time, air traffic controllers in the United States receive reports of unidentified flying objects coming perilously close to planes in the air. Surprisingly, none of the controllers wants to report that they have a seen a UFO, an unidentified flying object.

In Muncie, Indiana, there are major power outages, and two specific families experience unsettling events. Jillian Guiler wakes up in the middle of the night to find her son missing. Roy Neary sees a bizarre aircraft overhead, gets sunburned on half of his face, and begins to have visions of a mountaintop, to which he feels compelled to go.

Simultaneously, other uncommon events occur. In India, a group of people begins chanting an unusual 5-note octave that they claim came from the sky. The US military and NASA receive a message that extraterrestrial life plans to visit earth at Devil’s Tower, a small mountain in Wyoming. To protect the encounter from being disrupted, officials create a false health scare at the site of the impending touchdown. This will enable the military and NASA to rendezvous with the aliens without average people interfering with the planned meeting.

The rendezvous is accompanied by a light and sound show featuring a 5-note octave, which has already been heard by many of the principals involved in the meeting between the aliens and humans. Music, primitive as it is, becomes the vehicle that brings strangers together. The threat of an alien invasion dissipates in the face of expressions of love and connection from the strangers who want to understand the life of humans on earth and carry back that information to their own planet.

Judaism places a great importance on the power of song to unify disparate elements. Rabbi Jonathan Sacks writes: “There is an inner connection between music and the spirit. When language aspires to the transcendent, and the soul longs to break free of the gravitational pull of the earth, it modulates into song. Tolstoy called it ‘the shorthand of emotion.’ Words are the language of the mind. Music is the language of the soul.”

When words cannot convey the desire to communicate, music arises to bring two worlds together in harmony. Close Encounters of the Third Kind suggests that the creature from outer space is not here to destroy the human race, but rather to build bridges of trust and friendship between two planets. Fortunately, cool heads prevail and the encounter between the aliens and earthlings is filled with beauty, love, awe, and trembling. Each group sees the opportunity to expand one’s knowledge of the self and knowledge of the universe. Egos become secondary to the desire of everyone to explore the unknown and learn from the other’s experience. Close Encounters of the Third Kind reminds us that strangers can find ways to be friends.