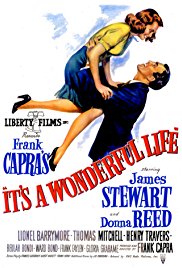 My wife and I recently had dinner with a family that warmly welcomed us to Israel seven years ago when we moved to Beit Shemesh. My friend’s wife asked me why we joined the synagogue of which they were members. I responded: “Because your husband smiled at me.” It seemed a superficial answer, but it really was not. The answer highlighted the impact of a small gesture that made a big difference in our lives.

And that is what happens oftentimes in life. We frequently do not realize the powerful effect of a kind gesture, how it can change what happens in the future even though the act itself seems minor at the time. This is the narrative arc of It’s a Wonderful Life, a classic film that considers the good that we do which has a ripple effect unto eternity even when we are not aware of the wisdom or generosity of our actions.

The film begins with a conversation between angels about the fate of George Bailey, a man on the verge of suicide. The angels decide to send one angel, Clarence, down to earth to convince George to live again and not let difficult circumstances overwhelm him.

George’s story is told via flashback. As a boy of twelve, he rescued his younger brother Harry from drowning on an ice-covered pond. We also see him save a pharmacist from making a major mistake by giving a customer poison instead of the proper medicine.

We later see George articulating his dreams. As a young man, he had thoughts of leaving his small hometown of Bedford Falls and becoming a builder in a large metropolitan area. But life is put on hold when George’s father suddenly dies and George is asked to manage his father’s savings and loan association. Instead of George going to college, his younger brother Harry goes and returns a married man with a job given to him by his father-in-law in another city. Later when World War II breaks out, Harry fights as a pilot and saves a transport ship carrying a boatload of soldiers. The rescue earns Harry the Congressional Medal of Honor.

George’s main business adversary in Bedford Falls is the greed-driven Henry Potter, who charges people exorbitant rents for his apartments and owns much of Bedford Falls. When the Great Depression arrives, George, now happily married to Mary Hatch, is hard pressed to loan his customers money to sustain them through the crisis. Potter, sensing George’s desperate plight, offers to buy George’s savings and loan. Miraculously, George weathers the financial storm and his business continues to grow and provide affordable housing for his community.

All is good until the day before Christmas when a bank auditor arrives to examine the bank’s finances. Unfortunately, he discovers a loss of $8000, and George is threatened with bankruptcy and possible prison time. After leading a life filled with good deeds, George is depressed and lashes out at those he loves. In the midst of this crisis, Potter again offers to buy out George and declares to George: ‘You’re worth more dead than alive.” This is the catalyst for George to contemplate suicide so that his heirs can inherit the life insurance money.

In the midst of his mental turmoil, Clarence, George’s guardian angel arrives and gives George an opportunity to reevaluate his life and reconsider his plan to kill himself. Clarence takes George on an imaginary journey looking at life in Bedford Falls as if George never existed, and subsequently viewing life as it actually happened. In that way, George understands that his life has been filled with good deeds and with blessings for himself, his family, and his friends. Clarence reminds him: “Strange, isn’t it? Each man’s life touches so many other lives. When he isn’t around he leaves an awful hole, doesn’t he?”

The Talmud tells us that it is important to greet everyone with a smile. It seems simple, but the Sages are telling us a profound lesson. When we smile at others, they smile back at us, and so a community of friends is formed. The small kindnesses that we do today, whether we recall them or not, implicate many tomorrows. It’s a Wonderful Life reminds us to appreciate the blessings of everyday, to value our friendships, to be kind, and to know that good deeds have a ripple effect into the future.